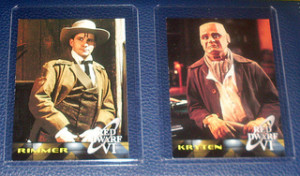 Rimmer and Kryten in Western gear, from the Red Dwarf VI card set, representing "Gunmen of the Apocalypse."
More images and writing about Red Dwarf X and the previous series DVDs (without spoilers) under the cut.

Red Dwarf X has arrived on DVD! I got the UK edition off eBay US, which was delivered yesterday. Along with a new external DVD drive for my laptop computer I viewed the "We're Smegged" documentary, since I've seen all the episodes in series X (being a documentary about how they made the series, it does have spoilers for the individual episodes.). Excellent, in depth and lots of laughs going behind the scenes with the cast! Doug Naylor has okayed US fans getting it early too, for those who can't wait to see the documentary. For those in Australia, the DVD will be in shops in December, and in American stores in January, with their respective region encoding. Computer DVD players seem to be able to play DVDs from other regions- should be useful when viewing discs that have not yet been released in the US but are available elsewhere in the world. I took a picture of both reversible covers, next to my star patterned curtains. (at night, of course!) One side is the promotional image created for Series X, and the other side is the classic style print to match the original series I-VIII releases.

Documentary highlights include interviews with all the principal actors and guest stars, writer Doug Naylor, script editor Andrew Ellard, and production crew. Tom Price (PC Andy from Torchwood, and also a comedian in the majority of his career) appears in video from the filming in front of the studio audience, as he was the host for the filming of the first episode. Ray Peacock was the warm-up man for other episodes of the series, who was also very funny on the clips included in the documentary (Ganymede & Titan has set reports from each of the shows in series X that were filmed in front of a studio audience). Interesting to see how many obstacles they had to overcome to get the series on the air, making it a challenge to produce but one well worth seeing through, hopefully to set the stage for future series.

From there I went for "The Beginning" on disc 1 (the sixth and final episode of series X), my favorite of the 2012 episodes, especially for Rimmer's role in the proceedings. Then I switched to series III for "Marooned," one of the all time classic Rimmer and Lister episodes, and "Camille" in series IV, quite a well done episode with insight into all the characters. Of course, my parents were watching Red Dwarf long before I was, on the local PBS network KTEH in San Jose, California. I remember seeing Red Dwarf promotions on KTEH back in 1998 like an airing of Red Dwarf A to Z. Later on KTEH showed series VIII, which, according to the Red Dwarf Programme Guide, included episodes that hadn't yet made their debut in the UK, so the "world premiere" airing of series VIII, episodes 4-8 was actually on KTEH in March 1999. Perhaps series VIII wasn't quite up to the standards of I-VI, but I found it has some things to enjoy about it. Craig Charles mentioned in interviews that the cast enjoyed getting back together again, after Rimmer's absence in most of series VII, and maybe VIII paved the way for development of the movie, DVD releases, and much later having Red Dwarf back in production for "Back to Earth" and Series X.  There was a lot of speculation about how series VIII and IX join up, but the deleted scene from the series VIII DVD seems as good an explanation as any. When watching all the episodes recently, I saw most of them in order but alternated between episodes of VII and VIII since Rimmer's absence was certainly felt in the episodes, even with his cameos in VII in the later half of the season. When "Back in the Red" begins, it seems to be a deliberate choice to introduce the "back to basics" approach and get fans back into it with Lister and Rimmer in a scene together, reminiscent of the original premise of the two of them in their bunkroom, talking or arguing over their latest predicament. "Back to Earth" and Series X begin in a similar way to reintroduce them as the core characters, later joined by the Cat and Kryten.

One of the episodes we watched recently was "Gunmen of the Apocalypse," in series VI, which includes one of the themes I wrote about in a paper for film class in college- the intersection between the western and science fiction- both about "the frontier" or in the case of Star Trek, "the final frontier," themes of exploration and conflict between explorers and those already living in the western space. Most science fiction programs seem to have done a western episode, like Star Trek the original series ("Spectre of the Gun") and The Next Generation ("A Fistful of Datas"), Doctor Who on several occasions, and Firefly spent the whole series on western tropes in space. "Gunmen of the Apocalypse" is known as the episode that won the International Emmy award, and it's certainly fun to watch, with each character getting a chance to show off. Rimmer gets some action too, and a cool Western suit! #marvelous
Tags: dvds, gazpacho soup day, red_dwarf, rimmer
Subscribe