Superbowl madness or sadness?
If you're in the U.S., will you watch all or part of the Superbowl? Do you have a favorite team? If you're not American, what do you think about Superbowl Sunday?
Reply 395

I tune in to the Super Bowl every year mostly for the music and entertainment from the commercials, and to watch the show after the Super Bowl.  I try to watch the mass entertainment shows on the networks like the awards shows and sports finales since I'm interested in the media and sharing a common experience with others.  It's also a time when I can watch with family or friends and sometimes have a party.  In my library class we heard about phrases that come up around sports like, "Who Dat" associated with the New Orleans Saints, and who should have ownership over those words.

I was non-committal about which team I preferred though I heard more about the Saints than the Colts from friends.  The teams I support are usually the ones in the Bay Area, like the San Francisco 49ers or the Oakland Raiders in football, or the San Francisco Giants and Oakland A's in baseball.  Since I have family in Philadelphia, the Phillies baseball team is also one of my favorites especially with their recent World Series win.

A Torchwood story by _mel42_
Takes place after the episode 'Kiss Kiss Bang Bang' (spoilers!)
& this scene is about Gwen and Rhys.
Torchwood belongs to the BBC- I don't own the show or its characters! 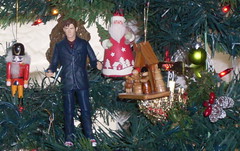 A Merry Christmas to All!
Originally uploaded by monikalel42

A Torchwood Story
by _mel42_

Featuring Captain Jack Harkness
Based on and set between the end of Doctor Who 'Last of the Time Lords' and the beginning of Torchwood 'Kiss Kiss Bang Bang' (spoilers for Doctor Who series 3, Torchwood series 2)

I'm _mel42_, I'm a fan of science fiction and fantasy especially Torchwood, Doctor Who and Star Trek.  I'm often writing,  listening to music, or reading.  I live in San Francisco, CA.  After graduating from college I went back to school to take classes in library information technology.  Other sites where I post include Twitter, Flickr, and Blogger.
Collapse